The Day At The Fair Story Part 1 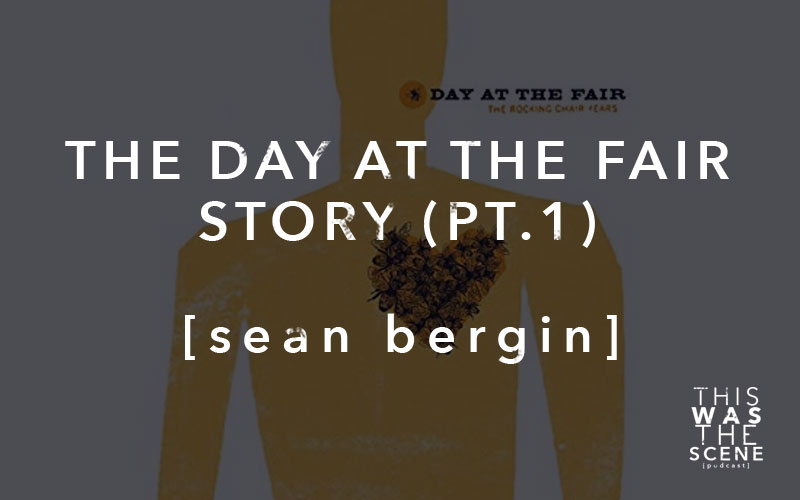 In 2001 Lanemeyer broke up. I was merely a recent fan, since I was away at college during the NJPP heyday and missed out on a lot of that scene. Truth be told, I had no idea that scene was even happening until my younger brother started telling me that he was going to all these firehouse shows and the bands were awesome. Pretty sure I scoffed, thinking that these were high school talent show level bands so I just ignored him. After all, I was going to see “real” bands at “real” venues like the Troc or the Stone Pony or the TLA. But eventually, I relented and checked out a few of the bands he kept raving about, specifically Saves the Day, Midtown and Lanemeyer. I instantly loved all three and recognized their talent. Lanemeyer was the last of the three I got on board with because the album I had, If There’s a Will, There’s Still Nothing I judged based purely on the inside photos. Let’s see, there was the screaming, shirtless bro on bass, an obviously super edgy lead singer guy whose face was obscured while he was hunched over, the drummer with the Spurs jersey he wore WHILE playing and I don’t know what Casey was doing in his photo. I assumed this was a Limp Bizkit/Shootyz Groove type band and held off on even playing the CD for a few months. I had ignored a valuable lesson I learned in kindergarten about judging books by their covers. But the point is, when I eventually did listen, I loved it.

Of course I jumped on the Lanemeyer train riiight as it was derailing and then launching straight off a cliff. They broke up like a year after I got into them, so that bummed me out. When I heard they broke up, I checked out their website for info and it said to stay tuned for upcoming projects from their members. Now I had not been aware Chris (edgy lead singer guy) had quit like a year earlier and been replaced by a guy named Brian Fallon (not sure what he’s been up to these days). So on the Lanemeyer site it said Chris was now in California working on some new project called, “A Day at the Fair.” The site listed his email address (pretty sure he still uses that same 19 year old email address to this day) and I decided to drop him a line. Essentially, I said I was from NJ but was now living in Dallas, and I was a big Lanemeyer fan. I also told him that if he got his new band off the ground and they started touring, they always had a place to crash in Dallas. To my surprise he emailed me right back. He was super cool and thanked me for my support. He also asked if I could give him a list of potential venues to play. So I sent him back a legit DOSSIER on every venue I knew of – “Deep Ellum Live: about 2,000 capacity, XYZ bands have played there, they have a bar, etc.; Trees: 1000 capacity, legendary club, XYZ bands have played there, also a bar on premises, etc.; Galaxy Club: small venue, no booze, XYZ bands have played there, etc.” And on and on the list went. I sent him a detailed list of about 10 different places of varying size and culture in Dallas proper. He then writes back thanking me profusely and asking for my address so he could send me an unmixed copy of their debut album, No Lights on Weldon. I got my copy a few weeks later and really dug it. I was happy a talented guy like that was still making music and not giving up the dream due to his previous band not working out. And, incidentally, I still have that unmixed copy somewhere, so start your bidding, collectors!

Chris and I stayed in touch periodically after that and we would keep each other informed on the latest goings on. In mid 2002, he told me he was moving back to NJ to go all in with A Day at the Fair. The rest of the band lived in NJ so it just made more sense to not be on, you know, completely opposite ends of the country. Coincidentally, I had had my fill of living in the Confederacy, so I was moving back to NJ around that time as well. This was around September of 2002. Chris and I lost touch after that for a while and my life was a mixed bag of garbage and dogshit. I got laid off in the summer of 2003 and putzed around doing stuff like painting houses and delivering pizzas. At the end of 2003, I heard Lanemeyer was reuniting at a Knights of Columbus up in north Jersey, so I decided to go check them out. I brought my brother since I had no idea what any of them looked like, but I wanted to find Chris and say hi. The show was a benefit for a kid with a brain tumor whose dad was a co-worker of Chris’s, which I thought was unbelievably cool. We go to the show and ask my brother to point Chris out. He’s the guy at the bar, sitting in front of a pitcher of Miller Lite, so I go up and introduce myself. “I doubt you remember me but I emailed you from Dallas and gave you a rundown of venues, etc.” He instantly replies, “Oh shit, are you Sean??” Not gonna lie, I was pretty psyched/flattered about that, because I was a longtime concert goer and huge music devotee and back then I really put bands I liked on huge pedestals. So for a guy I respected and admired to remember who I was based on a few email exchanges from a year or two prior, well that was pretty fucking cool. We get to talking and he was super nice. He gives me his number and informs me A Day at the Fair is playing the same place in exactly a week. So I tell him I’ll be back and I let him get ready for the show. I didn’t really talk to anyone else in the band, except maybe to say, “great show.” I do remember thinking the bass player seemed kind of like an arrogant douche, so I just avoided him altogether.

A week later, I’m back and run into Chris again. We’re chatting at the bar before the show, just talking about our lives. He asks what I’m up to work-wise and I tell him I’m basically unemployed but doing odd jobs here and there. He asks me if I play guitar, to which I confusingly responded “yes, albeit not well.” Then to my shock he goes, “Dude, since you’re not working – we’re going on tour next month, just like a 2 week tour down the east coast, up into Chicago and then back through the northeast. You should totally come with us and be our guitar tech/roadie/merch guy!” Huh? I naturally assumed this was sheer drunken buffoonery, since he barely knew me and I hadn’t even met Rob and Steve (bass player and drummer respectively and, you know, 2/3 of the fucking band). I didn’t imagine they’d be cool with Chris committing them to living with a flat out STRANGER for 2 full weeks, trapped inside an airport shuttle bus. But oh no – he was dead fucking serious. So I told him that sounds… awesome, but was he sure? I thought that was quite the level jump in our burgeoning friendship and maybe he should clear it with the other guys first. After the show he invites me onto their bus after they get done loading out. Chris and I are hanging out when Rob comes on board, and he proceeds to stare me down a bit. This is going to go great. Chris introduces me and then tells him, “Sean’s going to come with us on our tour and be our roadie/tech/merch guy.” My thought was, “here we go. This dude is going to lose his shit.” But in typical Rob Heiner fashion, he looks at me, shrugs and says, “cool.” Huh, again? I didn’t really understand what was going on as this seemed positively bananas. Way too much was happening, wayyyy too quickly. But then, as if on cue, Steve gets on the bus. Chris gives the same intro he gave Rob, but Steve’s reaction went a slightly different direction. He goes, “Ummm, what?!?! Who. The FUCK. AreYOU?!” while glaring at me indignantly. That was EXACTLY the appropriate response and the same reaction I would have had in his situation. It’s also the reaction I think 99% of the sane population of planet Earth would have had. But Chris ignores him and proceeds to tells him our history, while Steve is giving him a “No fucking way is this happening/ Are you insane? He could be a fucking serial killer/ We will discuss this later” look. I figured that was that. Steve was the clear voice of reason here and would veto this whole batshit idea. But whatever, I thought, no harm no foul.

Unbelievably, it wasn’t drunken buffoonery, Steve didn’t veto it and I ended up going on tour with them. They were just releasing their album, The Prelude, and I was in love with that record. So being such a huge fan and getting that opportunity was top of the mountain for me. I was now actually becoming friends with a band I thought extremely highly of and I honestly couldn’t have even imagined a greater thrill. This was huge for me, because while I played guitar a bit and loved music – I always dreamed of having that type of connection with a band I loved. But I still never envisioned myself being on the inside quite like this. I knew I would never actually get the chance to be IN a band of their stature and get to tour as a member, but this was the next best thing. And to be honest – to me, it wasn’t that far a drop off. Little did I know, this was only the beginning of my musical journey with (A) Day at the Fair.