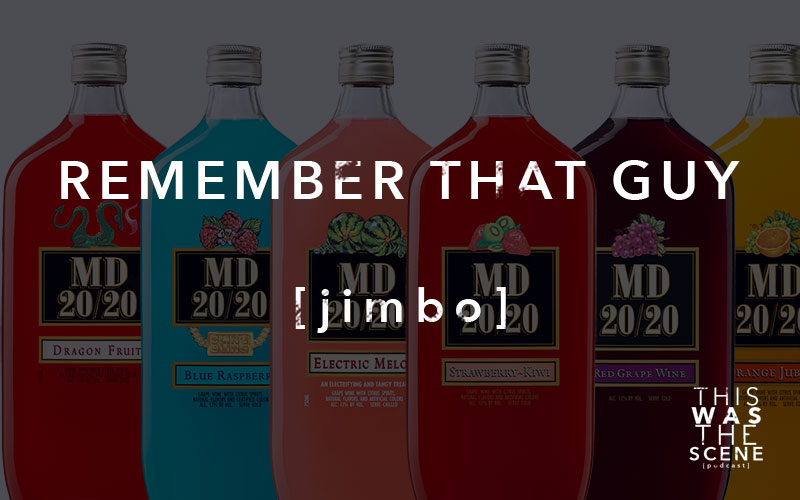 I wish I had driven out to The Regal Beagle to see a show that summer. My sense of direction is abysmal. In the pre-cell phone, fledgling internet days of 1995, the thought of getting lost somewhere in western Pennsylvania, driving around aimlessly in my ‘86 Dodge Aries K was unappealing. I politely told him I couldn’t make it. Weeks later, I got lost driving north to a club called Sea Seas in Moosic. Two simple chord changes, Route 476 to Route 81, and I still managed to colossally botch the trip. Tim and I eventually got there; it was aggravating and required multiple stops for directions. And with perfect irony, we found out that Strung Out had long canceled this particular show date. (In pre-social media 1995, photocopied gig flyers do not auto-update.) So immediately after setting foot on the hallowed parking lot of Sea Seas, we had to humbly turn around to drive 3 hours home in defeat. Upon our graceful late-night return, my friend’s dad put it best, “How the fuck did you get lost driving to Wilkes Barre?” Getting lost happened. It happened a lot.

The plan always formed with perfect precision in your mind. Someone cool told you about an upcoming show, or you came across a magical gig flyer in the forest, or you read something juicy in a music magazine, local newspaper or zine-like ‘F.O.E.’ or ‘Under the Volcano’. The latter you probably dug through like a hyper little music-obsessed mole with thick rim glasses. The next proverbial question, “Who’s in?” If you were smart, you and your friends coordinated ticket purchases in advance. This was a ‘responsible move’ for going to see the larger, national-level touring bands that would play places like the Trocadero in Philadelphia. If you were serious about driving down to Philly with your friends on the savage brutal bastard highway known as ‘Route 76 East’ and you paid for parking in the misty neon heart of Chinatown, you probably wanted to have a ticket handy for that show when you finally got through the winding security line and crossed that coveted stanchion.

The next part will not make sense to anyone under 35. Back then, Ticket Master shared some kind of primitive partnership with the local Boscov’s Department Store. Yes, Boscov’s, the upscale, overpriced department store that used to sell 30$ Vision Streetwear T-Shirts in 1989. For kids that didn’t live in Philly, Boscov’s played an elite role, one of the only accessible places to cop tickets for Troc shows, or any of the larger PA clubs for that matter like the TLA, Electric Factory or Chameleon Club in Lancaster. Boscovs’s was cash only. They seemed to exclusively employ elderly retail clerks, who would ask you to “spell that event again”, under a passive-aggressive huff of annoyance. The ‘Boscov’s Ticket Master Gauntlet’ was a slow, arduous, pain in the ass and it was not unusual for a friend to admit at the very end of the whole transaction that they didn’t have enough cash on them for their ticket. Of course, when news of shows broke, everyone was “totally onboard”, like Facebook invitations from the future, “everyone” was going to attend. Friends notoriously flaked. You could easily be left holding the bag because six of your friends ‘swore’ they would pay you for Mighty Mighty Bosstones tickets that cost $27 a piece. It happened.

There were also shows that became ‘Quests’. “Hey, Good Riddance and Ignite are playing at Spanky’s for five bucks, but you gotta drive to East Stroudsburg, PA.” “Ok, Where the hell is that?” Navigating unknown routes with photocopied show flyers in clenched hands, by the map light on the passenger-side visor required teamwork, patience, and finesse. Rarely were the clubs, rec halls or VFWs simple to locate. Punk shows sometimes moved, rescheduled or canceled on the dime in 1995. These adventures were not for the faint of heart or the uncommitted.

Back to the Regal Beagle… It was his show space that he dreamed up and manifested quickly. On one of our trips down to Philly to see the Queers and Mr. T Experience, he mentioned that he wanted to start a club in his hometown. Did all of us in that car really think he was going to? Probably not, but he did. One semester later, I remember him talking about duct taping a mattress to the barn ceiling so that the bands wouldn’t crack their heads on a post. I cannot tell you the exact address or even the western PA town where it sprouted, but The Regal Beagle really existed by the strength of his DIY magic powers. Proof exists in the liner notes to the first Edna’s Goldfish album ‘Before You Knew Better’, where the Long Island ska band thanked him and the Regal Beagle in print. Of the shows he organized, his stories about Brutal Juice and Edna’s Goldfish were the most memorable to me. Those two aforementioned bands did not play on the same night by the way and I’m fully aware that Brutal Juice and Edna’s Goldfish are worlds apart in the Punk Rock Akashic Records. It was not uncommon for clubs to book an eclectic, practically manic, variety of bands back then. In 1995 for example, 7 Seconds, Shooty’s Groove, the Dance Hall Crashers and Napalm Death might share a sweaty week in August on the calendar at the Top of the Rock Hotel space in Reading. It was like that.

The best way to introduce him is through the eyes of one of my friends. Damien casually ran into him on one meaningless afternoon about a mile down the tracks from Main Campus. He sat parked on his silver Mongoose in front of the discount liquor store, adjacent to the Dollar Store. Damien recounted, “Yeah, we saw him. He was just hanging out in the parking lot, holding Mad Dog 20/20 in a thin paper bag”. He had that navy blue XXL Dickies work jacket with the Bouncing Souls butterfly city logo screen printed across the backpiece. Greased hair, a wallet chain and a pair of thick plastic Elvis sunglasses, Damien described a WWF wrestler crossed with the singer from Sublime. ‘That guy’, chilling on his sticker-covered BMX sipping Orange Jubilee Mad Dog, was a cartoon character come-to-life in every sense. He was like a ‘friendly greaser’ from the Banana Splitz or the Flintstones. A punk rock ‘Big Lebowski’, years before the Cohen Brothers classic would become an excavated classic.

He was a big dude with a big heart. He was also super kind, hands down one of the greatest qualities that ‘Big Dave’ Thomas possessed. I witnessed many out-of-control circle pits on the floor of the Trocadero, where Big Dave would use his size and strength to shield some random kid from catching a boot to the face. Side note: the shows were more physical back then. Yes, you could stage dive at the Troc, which was fun, but you also had to own your space because mid-90s humans without cell phones are not afraid to crush each other. There were also a lot of pricks that thought you had to “act punk” in 1995, so they did stupid aggressive shit to prove they were more punk than you. It meant you had to always pay attention because of some 200 lb. asshole in a Korn T-shirt might randomly decide to stage dive from the lower balcony and crash on a pile of people. It happened.

At their core, the adventures were inclusive. He always offered rides and drove to countless shows all over creation. He encouraged me to invite kids I knew to fill every seat in his Buick. “Hop in, we’re going to see Weston and Plow United. Let’s go.” We ended up turning a LOT of people on to the music this way. The long drives down to Philly were fueled by junk food and a rabid excitement for the music. We talked endlessly about life, tattoos, and the Bouncing Souls, with whom he was friends. I still recall how effortlessly he reconnected with a Bouncing Souls roadie while in line at the Troc. A moment later we found ourselves behind the club in front of the Souls tour bus, kicking a soccer ball in a huge circle with Greg Attonito and a bunch of Philly punk rock kids. That was how Big Dave worked.

His stories were the best. Brutally honest and hilarious, Big Dave was an “all in” kind of person, never one to speak delicately or PC. I can’t fabricate one of his narratives to do it fair justice. It was better to just listen and appreciate. He partied with some great bands. He saw the humor in everything. He rolled with the punches, disappointments, and surprises. His personality was magnetic. My friends and I were glued to his stories of a summer tour with Joan Jett and Grieving Eucalyptus. It was so easy to envision him wheeling gear in his cut-off army fatigues, steel-toed Doc Martins and “wife-beater” T-shirts, sporting that broken bottle Bouncing Souls tattoo prominently branded to his outer bicep. He had a blue-collar swagger and it was easy to understand how Avail was one of his favorite bands. We went to a lot of shows together and we met a lot of bands. We talked to complete strangers while waiting in lines for Troc shows that used to wrap city blocks. There was an electricity in the air back then. I loved it. There were all these bands and friends that we’re equals. I feel like I’m misquoting a Rancid lyric. Big Dave constantly asked to borrow my copy of Swingin’ Utters ‘Streets of San Francisco’ and we would argue over which songs were standouts (cough, “Teenage Genocide”). We didn’t always see eye to eye. He loved Social Distortion albums that I didn’t vibe. He thought Strung Out “went fuckin’ metal” and could not understand my obsession with their ‘Twisted By Design’ album.

I only knew Big Dave Thomas for 5 years. I think about him every day. In 2008, at the peak of Facebook Mania, I tried with lockjaw determination to look him up. There was so much I wanted to ask him. I had major life stuff to share. I had a fiancé who loves music. I did illustration work for Punk Planet Magazine and I went on two cross-country tours with an art collective, then known as ‘The Big Art Show’. I wanted to reconnect, maybe even start going to shows together again. I wanted my new adult friends to meet this guy. He was an unforgettable person. Through Facebook, I learned from a trusted source that Big Dave was no longer on this Earth, his death a tragic accident. Rest in Peace Big Dave. I will see you on the other side.