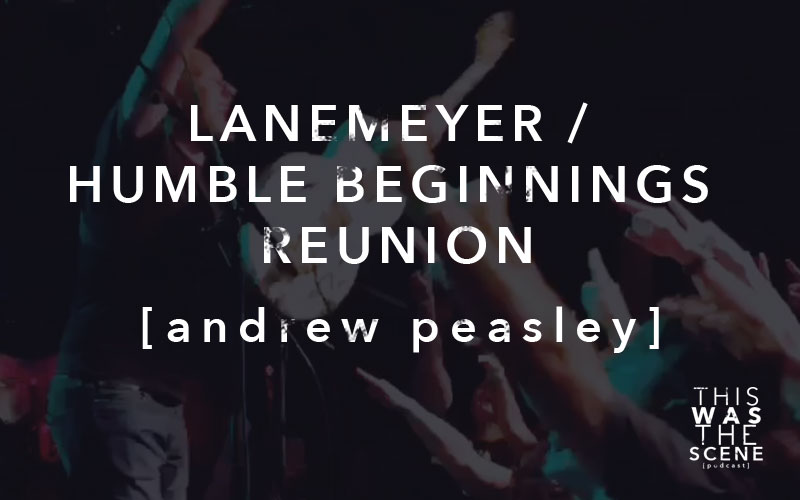 So I’m from Massachusetts, I live right on the MA/ RI border. Somehow most of my favorite bands from my teen/college days were all from New Jersey (LM, Humble, Boxcar, STD, Midtown, etc). I remember seeing Lanemeyer for the first time in New Bedford MA with River City High and Saturday Supercade in 1999 at a meeting hall for alcoholics anonymous. That night kind of changed my musical life (but that’s another story.) Also, the number of amazing bands I saw in that small little space was incredible (Weston, Hot Rod Circuit, Lawrence Arms, Ultimate Fakebook, Drexel, Smacking Isiah, The Lot Six and so many more because of Russ from All About Records).

I’d go on to see Lanemeyer 2 dozen times over the years, in various locations and I’ve even gone to Jersey to see them in their home element 3 times. My own shitty high school band played with them one time, and essentially the show ended when a kid’s hubcaps got stolen from this VFW Hall Show and he ran inside to announce it over the microphone. The crowd cleared out and that was that. Lanemeyer jumped in the van shortly after and back to New Jersey they went.

Do you remember the early internet? Everyone had an angel fire web page? I used to stalk those pages of these bands that were so close yet so far away. I’d read the same information over and over and I’d always check the dates of the shows to see where and when and what other bands were on the bill. One band Lanemeyer always seemed to be playing within Jersey back in the day, I didn’t get to see until 2010: Humble Beginnings. I’ve listened to them for years now and always keep going back to certain songs over and over but never caught them live until 2010. I actually saw the Forever Endeavor twice before I saw Humble (yes one time was with Gaslight Anthem in Providence RI). So after seeing them in 2010 I was positive I had checked them off my list and probably wouldn’t see them again. Then came the summer of 2018.

Not only were Lanemeyer and Humble doing a big show in Jersey, but it was also being billed as Lanemeyer’s last show ever. I had to go, and I did. I ran into a couple of guys from a band (GO 48) from MA who actually played at the Hubcap show and we all laughed at that story. Around my 6th or 7th beer of the night, I had a kid come up to me and comment on my Drexel shirt. We got to talking for a few and then it was like my synapses started firing and my inner monologue went off: …wait…is this….no it can’t be….OMG, I think it is…

So, then I did the only thing I could do “Hey can I ask you a weird question?”, the kids face got a little apprehensive as you could almost watch each letter spill from his mouth when he said “SURE…”.

“Did you have your hubcaps stolen at a Lanemeyer show in MA via 2000?”

The dude’s face was the only answer I needed, IT WAS THE HUBCAP KID!!! He went on to say how he lived in Ireland now and happened to be visiting a buddy in NYC and this show coincided with this trip so he had to make it! We laughed a little bit and I told him about the GO 48 Kids being at the show. After a little bit of reminiscing, we went our separate ways for the rest of the night.

OH, AND BTW he got those hubcaps back, some kids from my high school who were at the show stole them, so I retrieved them and mailed them back to him. Thanks, AOL.

During the Humble Beginnings set I had noticed an older guy at the club rocking out. He seemed to know a ton of the words and was singing along. I thought that was awesome. So, as my girlfriend and I were waiting for Lanemeyer to come out, and because my drunk level was at making friends with everybody, I decided to say something to the older guy.

“Hey man, you knew as many lyrics to those humble songs as I did!” He smiled a huge grin and said, ” Well, Josh is my son”, to which my eyes bulged and I smiled a shit-eating grin and said, “I’m a big fan” Next thing I knew my girlfriend and I are surrounded by his family. Brothers, Sisters, Spouses all with smiles on their faces.  Now I’m a bit drunk at this point but in a super good mood and I’m finding the whole scenario hilarious. I told them a story about seeing the Forever Endeavor in Providence RI (yes the gaslight show)  and how Josh said that night on stage “It’s great being here in Danbury CT ” and how I knew he was kidding but I thought that was so funny it stuck with me a decade later.  The whole family seemed to enjoy my drunk anecdote and they couldn’t believe my girlfriend and I had driven down from Massachusetts to be there that night. Then the music started and we got lost in the crowd. After Lanemeyers set I would end up saying goodnight to the whole clan before we left, but not before Josh came up to me after the show, explained he had talked to his Dad and how thankful he was we came,  he even gave my girlfriend a free T-shirt (I had already purchased one).

The night ended hilariously as well, my friend John had won a free Lanemeyer vinyl and asked me to pick it up since I was going to the show and he was not. At the end of the night, I went up to Doyle and got the record and said…” did you guys sign this by chance? He said he wanted it autographed “, Doyle laughed and said “No”. Should have been the end of it but I stood there in a drunken stupor for a moment trying to wrap my brain around what this meant and just dead eye staring at Doyle. The lights were on but nobody was home. Finally, he said “Dude, Chris already went home so…”. That snapped me out of it, I took the record, shook some hands, grabbed my lady, got an uber, and back to the hotel we went.

The funny thing about drinking is if you do too much of it you can blackout, and that I did. Waking up the next morning my immediate question was “did I offend anybody?” and was told I had not. Small miracles ya know? From here the rest of that Sunday was pretty crazy. Drove back from NJ got home, unpacked, drove to Boston to catch the Foo Fighters at Fenway Park. They played a monster 24 song set complete with crazy stage gimmicks and JOE WALSH from the Eagles coming up to play 2 songs with them. I made it home that night and literally had zero energy. I had seen 3 of my favorite bands in a 48 hour period, lost my voice and was just drained but I had the time of my life. Thankfully I took Monday off. That Tuesday I received an email, not remembering I had given it out. Josh from Humble had emailed me thanking me again for coming to the show and he added me to a dropbox account with permission to download the newly remixed version of the 1st Humble album. My jaw hit the floor, not only did I not remember giving him my email. I didn’t even think he’d remember our conversation. My girlfriend went on to remind me about the encounter and that is probably about the time I blacked out. She also told me Josh and I was literally fighting over him trying to give me a free T-shirt and basically, that’s why she took it. She also informed me about our Uber ride back and explaining my love of New Jersey Pop Punk to the driver ( I can only imagine how that went!).

I have no idea how to end this story but I think that’s kind of fitting considering I don’t really remember how my night ended.